A recently published report of mine – ‘Turkey’s Destruction of Kurdish Graves’ – published by the Mesopotamia Observatory of Justice (Mojust) and the Turkey based Özgürlük için Hukukçular Derneği (Association of Lawyers for Freedom – ÖHD) provides, for the first time, an unprecedented account of Turkey’s acts of destruction that have been directed against Kurdish cemeteries and graves in the South East of Turkey (North Kurdistan) from 2015 to the end of 2020. 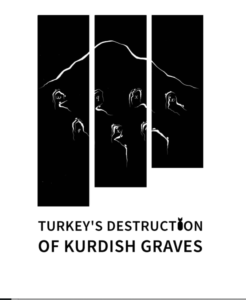 The Turkish security forces’ systematic acts of destruction of Kurdish cemeteries and gravestones in 11 provinces of Southeast Turkey demonstrates one of the Justice and Development Party’s (AKP’s) modern suppression methods that has bolstered Turkey’s Kurdish annihilation policy. The pro-Kurdish party, the Peoples’ Democracy Party (HDP), has made numerous attempts – documented in our published report which is freely accessible and downloadable on our Mojust website – to hold the executive accountable in Parliament for these widespread and systematic attacks.

The significance of the report

This report is unique for three significant reasons. Firstly, it consolidates available news presented by domestic and international newspapers as well as news agencies and the findings of human rights associations in Turkey that have addressed the nature and form of the Turkish state’s attacks on Kurdish graves and cemeteries. Secondly, it demonstrates how the pro-Kurdish party, the Peoples’ Democracy Party (HDP), persistently tries to hold the executive accountable in Parliament for the widespread and systematic attacks that have taken place against Kurdish cemeteries and graves in North Kurdistan by the Turkish security forces.

Finally, it presents a rigorous study using empirical methods that have been used by both Mojust and ÖHD in their pro bono efforts to assist the victims of these attacks in their quest of justice in order to break the state’s traditional and systematic policy of impunity for perpetrators of these crimes. To provide a political context to these acts of destruction by the Turkish state, the first part of the report also provides a brief overview of Turkey’s Kurdish suppression policy under both the Kemalist (from 1923 to 2002) and the Erdoğan regimes (post-2002 to present).

The report has the added advantage of making publicly available information accessible, in one place, about Turkey’s systematic acts of destruction against Kurdish cemeteries and graves in North Kurdistan. In this context, this research fills an important gap in the field of Kurdish Studies.

The findings of the report reveal that publicly accessible information indicates that Turkish security forces made 122 attacks against Kurdish cemeteries between 17 September 2015 and 4 April 2020. As a result of these ongoing acts of destruction of cemeteries and gravestones, at least 1,644 graves were completely destroyed and 2,926 graves were vandalised.

The Turkish security forces completely destroyed 18 cemeteries where the graves of fallen Kurdish Workers Party (PKK) militants are located in 11 provinces of Southeast Turkey (North Kurdistan) by air bombardments and using explosives during the above mentioned time periods. 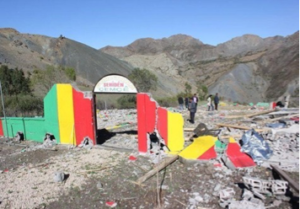 These figures also present the minimum number of graves which were destroyed and damaged. The exact numbers of graves targeted for destruction in the South-East are still unknown. As stated by the Unity and Culture Association for Aid and Solidarity with Families Who Lost Their Relatives in the Cradle of Civilizations (MEBYA-DER), the above figures of the vandalised graves provided in my research report can only “correspond to less than a quarter of the real figures” due to the fact that any research on his issue is constantly and persistently blocked and criminalized by the Turkish State. 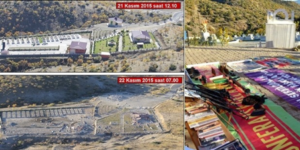 Images ‘before’ and ‘after’, capturing the extent of destruction in 2015 of Martyr Harûn and Martyr Hêwîdar cemetery. Source: Everensel.

The executive failure to provide any statistics regarding the destruction of the Kurdish graves by the State security forces despite Peoples’ Democratic Party (HDPs) MPs’ persistent inquiries regarding this issue further supports this claim.

The MOJUST report provides a chronology of state actions targeting cemeteries and graves of PKK fighters from 2015 to the end of 2020. The following examples, documented in the report, serve to highlight the types of specific targeting actions that have been undertaken: 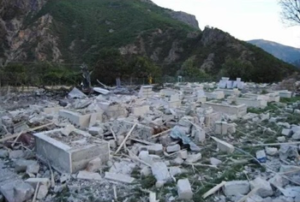 Turkey’s wilful and systematic acts of destruction against the Kurdish cemeteries and graves demonstrates that these crimes have been planned by the executive and implemented by the security forces on the basis of executive order and legitimized by the judiciary. It is evident that security forces identified the locations of cemeteries where the fallen PKK warriors rested in the rural and urban areas of the Kurdish region in a systematic manner and destroyed them, either with aerial bombardment or explosives.

The security forces deployed the same systematic pattern of identification of graves of the PKK’s militants in the public cemeteries in urban areas of the Kurdish region and they either vandalized these cemeteries in a systematic manner or forced the families of the fallen PKK militants to vandalize the gravestones of their children.

The fact that these crimes have been systematized and institutionalized by the State can be validated by noting the rejection of a proposal to establish a Parliamentary Investigation Commission examining the conduct of state security forces on the Kurdish cemeteries and graves and the lack of any oral and written reply by the executive to 23 motions submitted by HDP’s MP’s between 2 May 2019 and 17 June 2020 with regard to this matter. Further support for claiming that these crimes were planned can be drawn from the extension of the state’s traditional and systematic policy of impunity for perpetrators of these crimes. 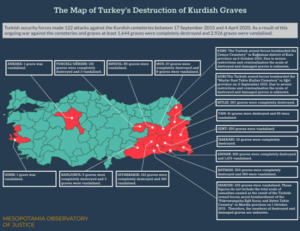 The Chief Public Prosecutor’s Office has not made any decision with regard to 26 out of 32 of these complaints. In relation to 3 separate complaints made by families and 3 separate complaints made by the HDP, it decided that there was no need to investigate the criminal complaints against the security forces. Only one of the appeals against these decisions of the prosecutor reached the Constitutional Court. Here, it was ruled that the allegations of violations were inadmissible due to a failure to exhaust the remedies, despite the applicant having already exhausted all available remedies.

Moreover, the justification provided by the Malazgirt Chief Public Prosecutor for rejecting the opening of an investigation in relation to the HDP’s complaint regarding the vandalization of the graves in Mus province revealed that state security had been ordered to identify the gravestones of fallen PKK members in public cemeteries and destroy them through the court’s decision.

Instead of opening an investigation against the perpetrators of these crimes, the Chief Public Prosecutors have brought mass criminal cases against those families whose childrens’ graves were vandalised by the security forces on the basis that Kurdish inscriptions on the gravestones of their children constituted the crime of making ‘propaganda’ for the ‘terrorist organisation’, the PKK.

It is evident that the Erdoğan regime has institutionalized widespread and systematic attacks on Kurdish cemeteries and graves as part of the regime’s psychological warfare strategy to demoralise and humiliate Kurds so that ‘they’ – as ‘Othered’ peoples – can be taught a lesson and ‘obedience’ can be secured through the perpetration of these crimes. The long-term aim of these attacks evidently seems to be to complement the ‘state terror’ of forcible evacuation and destruction of the rural and urban Kurdish regions which started in 1924, and which was systematically re-implemented in both the 90’s and during the nine-month curfew in 2015-6.

The Erdoğan regime appears to have determined that, as long as the Kurdish cemeteries and relevant gravestones exist and are located in the Kurdish region, it will not be able to cut off the inherited connection of Kurdish people with their land, history of struggles and past generations. Therefore, through the perpetration of these crimes, the Turkish state aims to erase the material traces of resistance of the PKK against Turkey’s Kurdish annihilation policy and prevent any transformation of it into a collective resistance memory.

*Legal Advisor at Mojust  and an Associate Fellow at the John Hopkins School of Advanced International Studies. 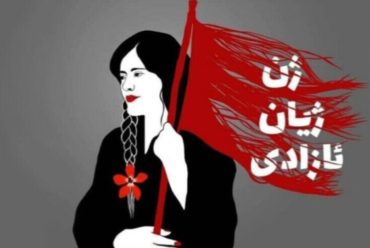 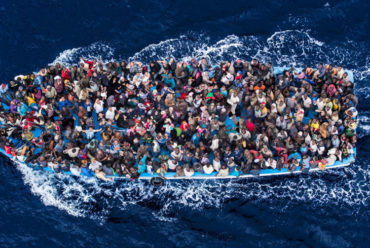 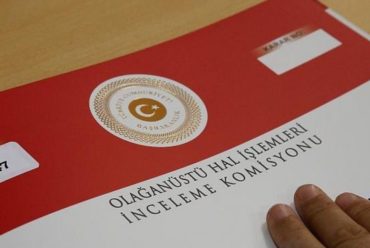 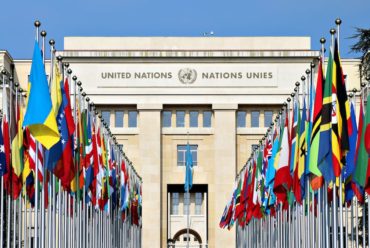 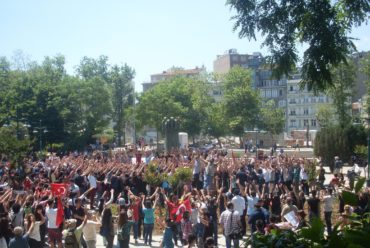 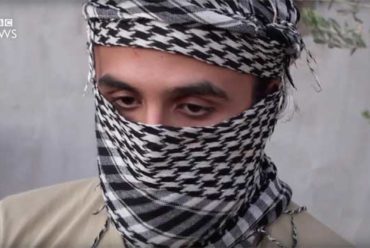